The Felix Fund - A Little Motivation

It all started one morning at the bus stop when I had to carry Nathan onto the bus and buckle him into the seat because he wanted to stay behind and pet a neighbor's pug.

I really thought he was just being oppositional and trying to find a way to stay home but when the bus dropped him off in the afternoon, Nathan made a bee line for Felix.  Seriously, not even a "hi mom", he just tossed his backpack at me and then proceeded to pat the grandpa pug on the top of his head.  He was so gentle and completely in the pug zone.  All the kids at our stop were playing and Nathan wanted to invite himself over to his friend's house, Felix that is.

We are thinking, after seeing how attentive Nathan is with his new friend, that it might be therapeutic for him to have his own dog.  After looking at photos of many breeds, Nathan is still locked in on the small, bulgy eyed, wrinkly, flat faced breed.  The pug life definitely chose Nathan.

But we aren't going to go buy a pug tomorrow, we are going to make him work for it and earn it, by eating.  Most other reward systems for eating have been complete failures so I am hoping this is some serious motivation.  He is going to get quarters for eating his lunch at school, the one meal a day I have absolutely zero control over.

He was stoked to pic out the pictures he wanted to glue onto his Felix Fund Jar.  The first photo he chose was a pug wearing gold grills on his teeth, the second photo was a very obese old pug which is his favorite photo, and then the rest were darth vader, yoda, batman and robin pug among other cute pics.

When he got home from school I let him cut out and mod podge the photos onto an old plastic animal cracker jar I was using to hold some yarn. 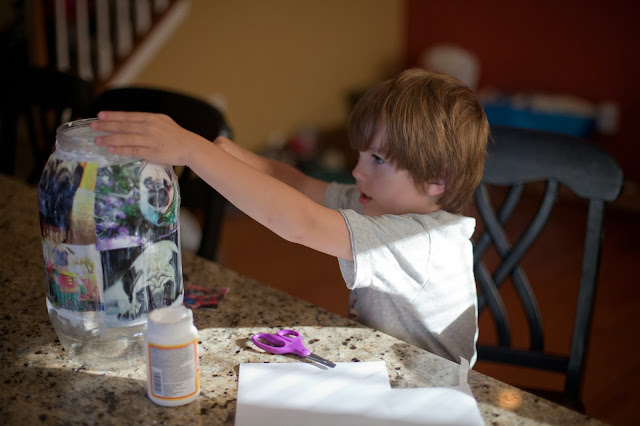 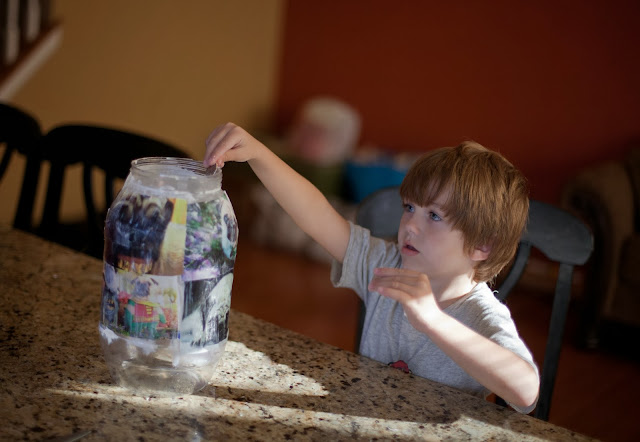 The name may change, but right now he wants it to be Felix, just like his friend Felix.
at 7:01 PM