DIY Wall Art: Every Brother is a Superhero 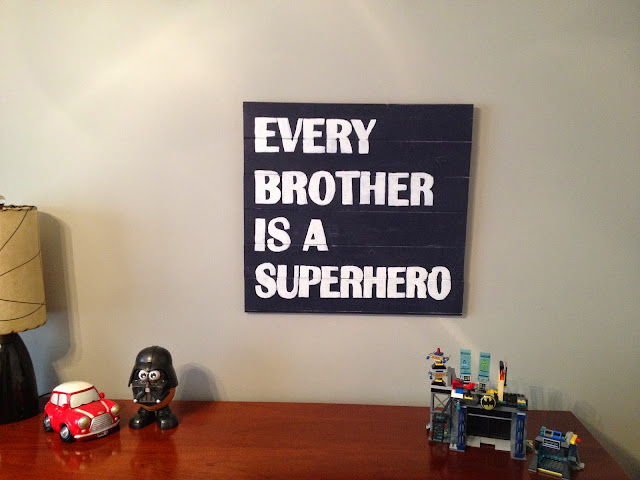 I know when I was a little girl my brothers were my superheroes and I am sure Teagan considers Nathan to be her superhero.  One thing is certain, Nathan, regardless of beinng a brother, is a hero to many with super powers.  With all that he has been through (blood work, hospital admissions, procedures, tests, unpleasant tasting medications, treatments while on vacation or with friends, treatments in general...) he rarely complains.

As I was flipping through a Pottery Barn Kids magazine about 6 months ago, I was inspired by a piece of wall art and tore out the page.  It has been tucked inside my idea book ever since that day but I finally tackled this project now that  I am beginning to nest.

I purchased a pack of Whitewood Wainscot Panels.  They came in a pack of 12 - 32" panels for about $11 -- I only used 6, which leaves 6 panels for me to do something fun for the girls room.  I cut each of the 6 panels down to the width I desired and then locked them together. 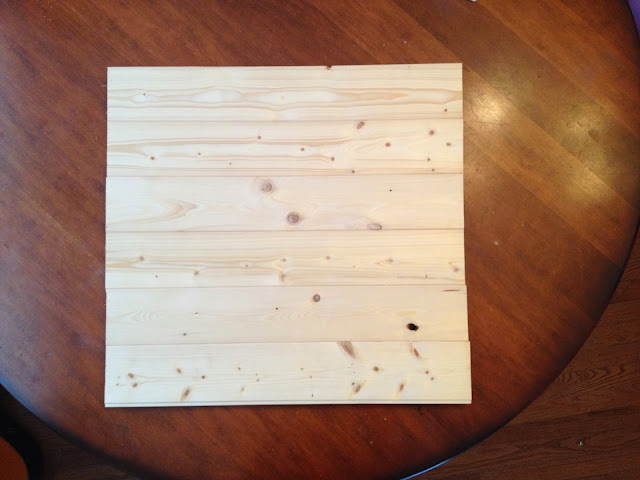 Next, I flipped the panels over so I was looking at the back of them.  The vertical pieces of wood were scraps from the garage.  I don't know if they are considered furring strips but basically you want slightly shorter than the height of the assembled panels and not too thick otherwise the wall art will stick out far from the wall.  When I was about ready to drill the screws, I put a small strip of wood glue behind each of the two strips, probably a little overkill but I am good at that.

As far as the screws go, just make sure they are short enough that they wont poke through to the front of the panels. I had 3/4 inch screws in my tool chest but had to get 1/2 inch screws so they wouldn't go all the way through. I didn't have to pre-dill holes because the whitewood was so soft and the screws drilled in no problem. I used 12 screws, 6 in each panel on each side. 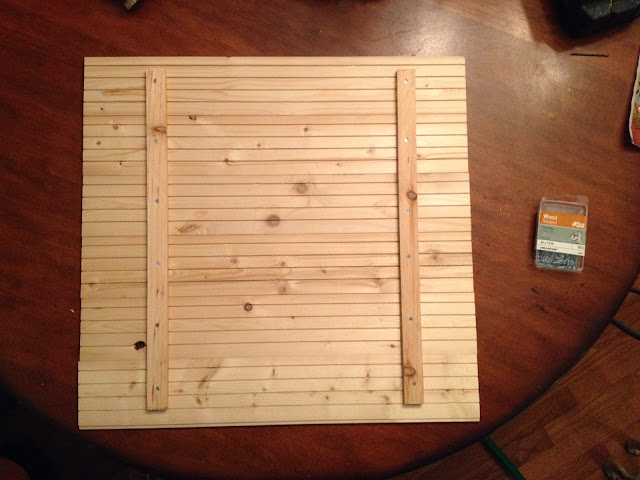 I lightly sanded the front of the panels and the edges and purchased a sample of paint.  I chose Pantone - Mood Indigo which cost about $3.  It didn't take much paint at all, I have basically the entire sample remaining.  I used two coats but ended up sanding it to give a slightly distressed look. 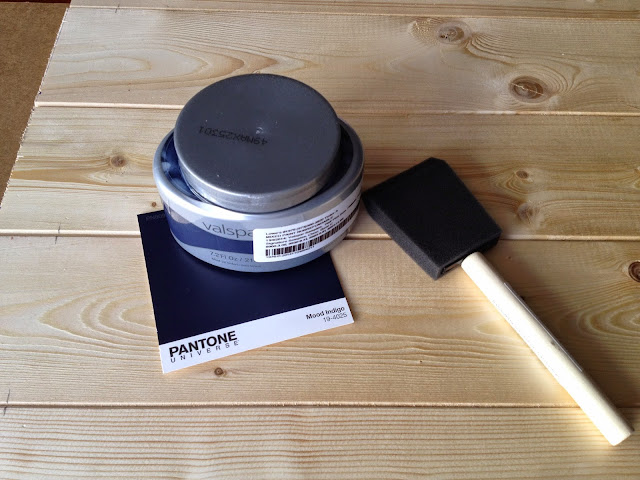 Once the base color dried, I outlined the words using a white paint pen. 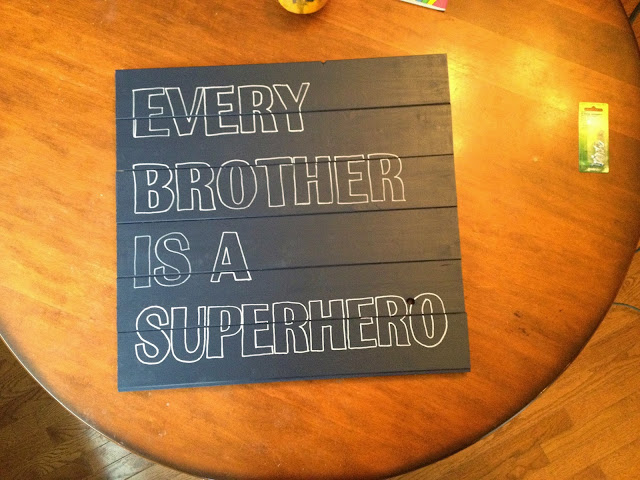 I had some high gloss white left over from trim touchups so I used that to fill in the letters.  It was a little thick so I added a little water. 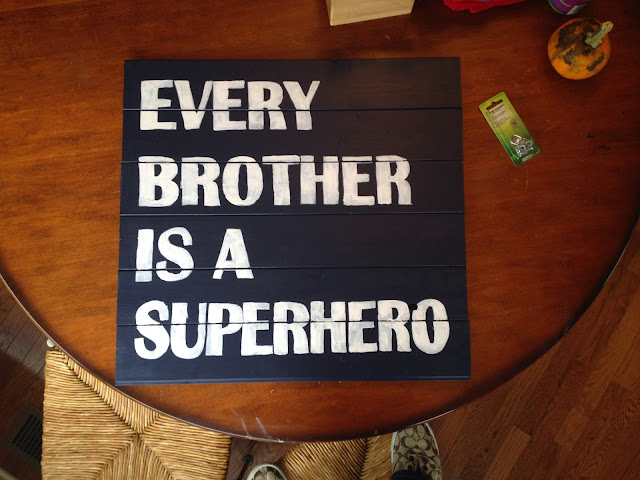 This step took the longest as I painted at least 2-3 coats of white and then had to touch up the blue and then I ultimately sanded and distressed the blue. 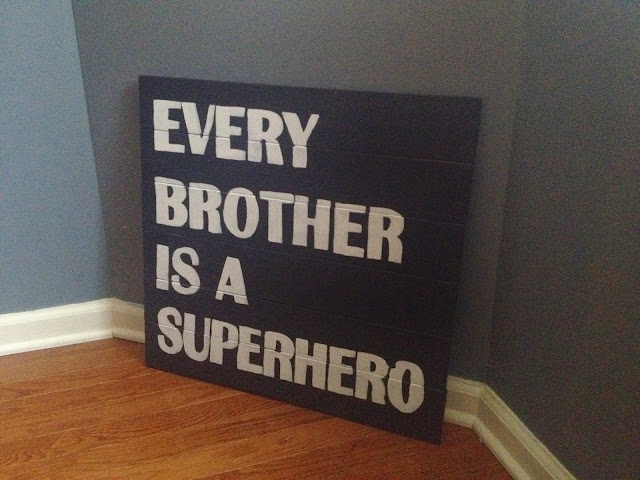 I am sure you could use any hardware to hang but I chose small D-Ring Hangers.  It is not a heavy piece of art so I didn't overdo it with heavy hooks. 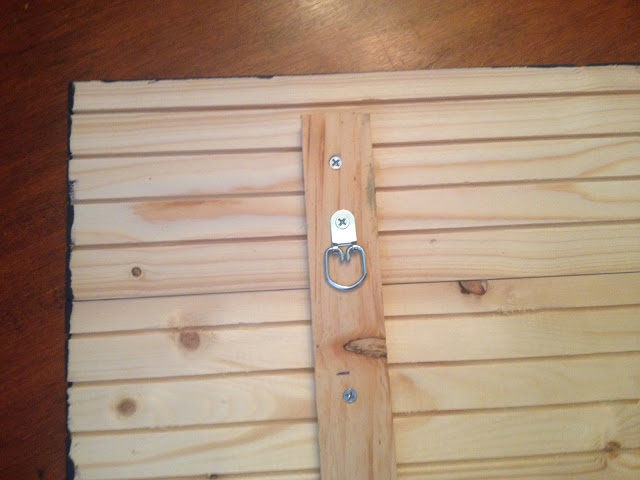 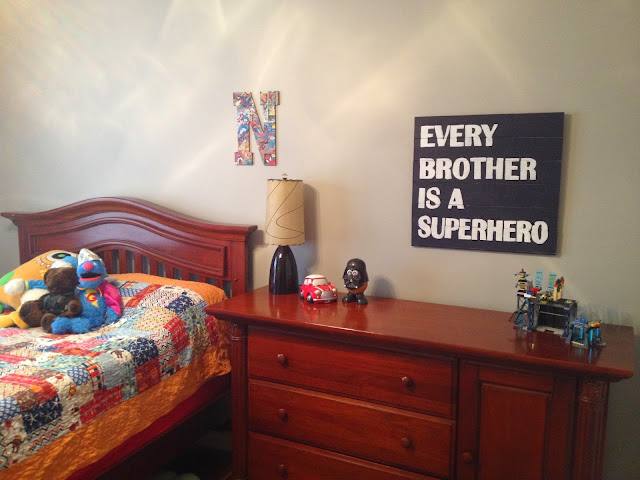 I have a few more fun projects in mind for Nathan's bedding and decor, but I am trying to completely finish one thing at a time.